High Risk of Wildfires in the UK!

High Risk of Wildfires in the UK!

Currently, much of England has a high to very high risk of wildfires according to The Met Office's Fire Severity Index (FSI). Although some regions may have experienced rain over the bank holiday weekend the risk still remains high.

Low levels of rainfall have left the countryside unusually dry and recent weeks have already seen some devastating fires which have killed wildlife and destroyed huge areas of habitat.  In many cases, barbecues and open fires have been implicated in starting them.  Even a carelessly discarded cigarette can start a blaze and any fire lit on dry ground may risk igniting material below the surface.  This can continue to smoulder and flare up later even if the fire appears to be out.

The British Deer Society strongly urges that fires of any kind (including barbecues) should not be lit anywhere that has restrictions in place. If you are not sure about possible restrictions then please don't take the risk. We would also like to remind everyone that ‘wild’ or any other kind of overnight camping is still currently not allowed anywhere in the UK. 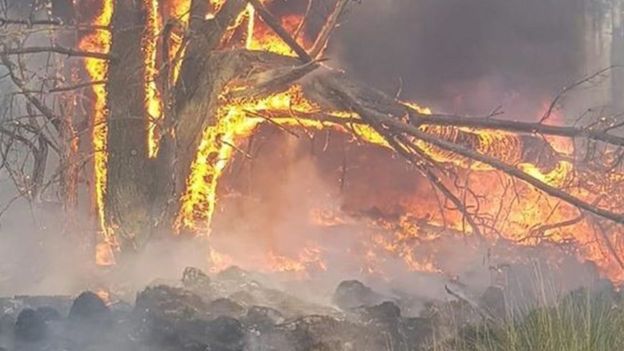 In addition, the risk also remains high for many parts of Scotland although they currently have different restrictions in place in regards to exercise and recreation. However, it has been reported that the rules affecting Scotland may be relaxed to some degree from May 28th onwards.

Wales and Northern Ireland also remain at risk of wildfires as seen in several media reports this month.